Today is the start of week 2 of BlaugustReborn, and I’ve managed to have a post and drawing (of some sort) up each day! I’m really excited about that consistency and decided to write about my general process for today’s post.

Earlier this year, I switched jobs and decided that as part of that transition I wanted to put a lot more effort into creative endeavors, specifically improving my drawing/illustration/graphic design skills, with an end goal of someday doing those things as my primary source of income. I also want to spend more time writing, as I feel that documenting my perspective and experience of the world will help me “look” at life more critically, which I’m hoping will translate to helping me create better and more meaningful art.

Unfortunately, the new job has me commuting a lot more than I had previously, so much of the free time and energy that I thought would go towards creativity is instead spent driving my car back-and-forth for work. When I  do end up with free time, about all I have creative energy for is to make silly comments about video games on Twitch for a couple of hours. Sitting down to write or draw takes a lot more presence of mind.

Thankfully, hearing about the BlaugustReborn Initiative on the Geek-to-Geek Podcast really made we want to to give another genuine shot at the blogging side of things. I really struggle with being an active part of online communities, but every interaction I have had with the hosts and fans of the Geek-to-Geek podcast has been super positive, so their endorsement pulled me into the Blaugust community, which is just incredible! Seeing the content that others in the community created made me double down on wanting to consistently put my own stuff out into the world.

Unfortunately (again… there’s an end point coming, I promise!), I still struggled with finding the time to get ideas written and posted. I’ve historically been a bit of a perfectionist when I write, so even when I have an idea I like I end up editing it over and over and over again instead of doing anything with it. What I’ve started doing for Blaugust, in order to get past that, is twofold; one, I’m not overediting myself, and two, I’m using a dictation app to get rough ideas down first. In fact, I recorded the initial “draft” of this post on 8/3 while I was driving into town to run some errands. Using the app “Just Press Record” is nice for thinking through my thoughts at a reasonable pace and getting the initial ideas down, but they do not work for actually writing a post because, well, the technology still isn’t there yet. (I’m going to include the initial transcription and the audio file at the bottom of this post so you can see what I mean. If it says anything too horrible in the transcription, blame our benevolent computer overlords, not me!)

Once I have the transcription from the recording, I pull it up on WordPress and start heavily editing it into something legible. In fact, I usually end up starting to type ideas from scratch about halfway through, rather than following the flow I dictated. This is partly because I think written words flow differently than speaking, but also because I look at that transcription as a first draft, and I’ve thrown out at least half of every first draft of anything I’ve ever written!

At this point in a post, I’ll usually have a pretty okay draft, and I only allow myself to go through one time for a quick edit. This is the most difficult part for me, as getting stuck in an editing loop can be my downfall. My wife has experienced this when she’s asked me to look over papers she’s written, and I have to clarify if she’s looking for spell checking or editing… because I will always have a thousand notes on the “editing” side of things, even if in reality a piece is damn near perfect. For blog posts, though, both because of the format and because of pushing myself to get one up a day, I need to force myself to lean towards the spell checking side of things, and to accept that each post won’t be perfect.

The last part of my process is getting a drawing up each day. I’m not really sure why I set this additional challenge to myself, because just writing is tough enough, but I’m glad that I did. I didn’t put any restrictions on the size, format, quality, etc of each piece, I just decided that I wanted a somehow connected piece each day. For some posts, I know what I’m going to be writing about far enough in advance that I can start the drawing a few days early, but for most I’m usually working on the drawing before work, during a lunch, and then getting it finished and posted after work. Most of the stuff I’ll draw for BlaugustReborn won’t be complete, finished drawings, but they’ll be something that I made.

And that’s really what my goal with all of this is. I want to make more things. Someday, I want to make a living off the random, weird ideas that I feel driven to make, but in the meantime, I need to keep making small things to practice, to stay motivated, and to just be able to say “hey look, I did it.” 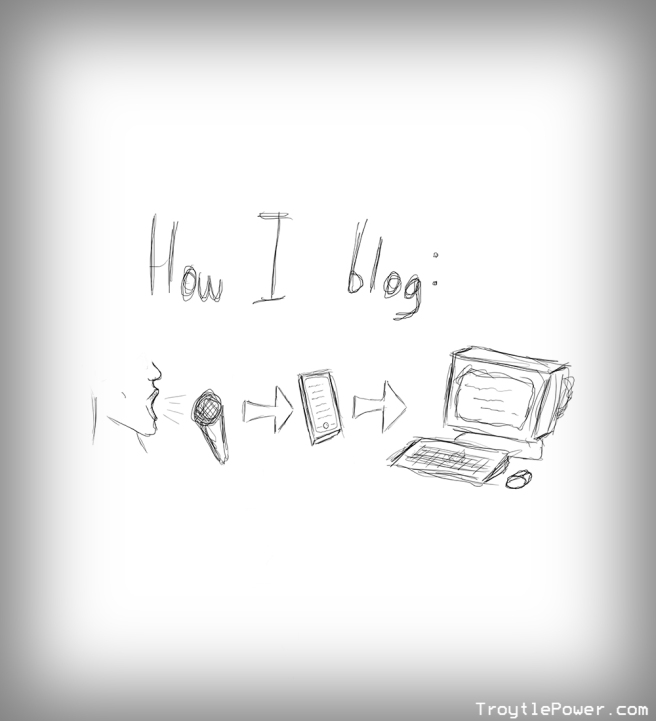 Here it is, the raw transcription from “Just Press Record”:

And finally, the audio version:

One thought on “How I write my blogs”