Hollow Knight is a Metroidvania style 2D action platformer where you play as a bug with a nail, battling your way through a variety of underground environments, including a fungus-filled cavern, an abandoned city, and a crystal mine. Upgrades come in the form of more powerful weapons, new maps, and changes to the way you move through the world. 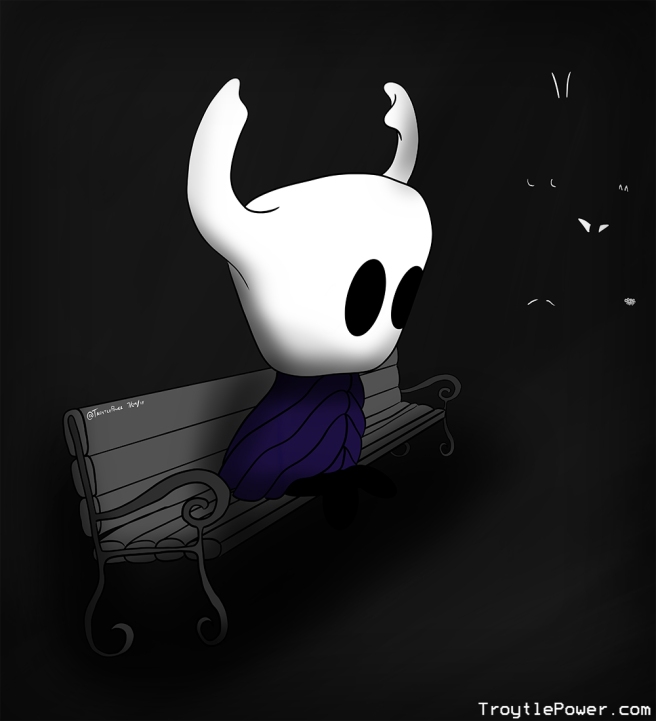 At the start of the game, you enter into an abandoned town called Dirtmouth as a little bug creature. He wears a cloak, a white helmet/mask, wields a nail, and has adorable little bug legs. Most of the other creatures you meet in the world have a similar look, and they populate a series of labyrinthian biomes you access through a well in Dirtmouth. The cohesive look to the enemies you battle is one of the things I find most interesting about this game. While there are only a few characters who talk, the non-talking, cannon-fodder “monsters” don’t look that different, which leaves me wondering if they really are mindless nothings, or if they have just as much chance of being productive bug-members of the bug-society as the speaking characters.

As you progress further into the game, you also come across a series of battles with beefier and brawnier boss characters, some of them taking upwards of 1/3rd of the screen. Each one has a different pattern, in classic Metroidvania fashion, and most of the challenge comes from learning the pattern, identifying weaknesses and opportunities in that pattern, and then executing on them. If you pay attention, you can usually beat a boss in just a few attempts, at least with how far I am at this point. On each victory, you’re rewarded with a boatload of in-game currency, badges that augment your abilities, a new exploration path, or new mobility options, like wall jumping or being able to dash sideways in the air, which allows you to reach previously inaccessible parts of the map. This is the basic progression loop in Hollow Knight: Explore, find a boss, die a few times while you learn it’s pattern, beat the boss, unlock a new location, rinse, repeat.

I do want to talk a little bit about how that’s not always the case though. There was one boss in particular that I came across that I was certain I was going to give me the ability to do a double-jump. There’d been nothing explicit in the game to say that a double-jump existed, but I had seen several places where one would be beneficial, so I assumed that one would be coming. I fought the boss a couple of times, and he kept destroying me, so I gave up on beating him until I found something to help me in the battle. I spent quite a while looking for something, anything to help, and just kept coming up against obstacles I clearly didn’t have the mobility abilities to get past. Eventually, feeling discouraged by my inability to find anywhere else to go, I decided to go back and fight this boss again. I was streaming on Twitch while I did this, and ended up getting killed many, many, many times before I stopped to pay attention to what was actually happening with his pattern. In short, he would stand in the middle of the screen and shoot projectiles at me that I just couldn’t dodge. And then I realized… he is in the middle of the screen, so all I had to do to beat him was jump over him while he was firing, and his projectiles would land on the side I’d been standing on before! After that, victory was quick and sweet, and I went on to receive my well-deserved reward… which was a fragment of a health upgrade. Not a double jump, not anything that would help me get to a new area, not even a full upgrade… for those who have played Zelda, I spent all of that time to get a Piece-of-Heart.

So, after beating that boss, I had to go back to exploring! And you know what, even though I was only in the starting area of the game, and didn’t have a huge amount of map to move through, there were still things that I had missed. Eventually, I found the mobility upgrade I needed – which was actually the air dash, not a double jump – and was able to move into a new zone. Thankfully the exploring in this game is really satisfying… I’ve always felt personally driven and rewarded by exploration in video games, and Hollow Knight does it particularly well. In each area, you find an NPC who gives you a new map, which shows you the rooms you’ve been to, along with suggesting rooms you haven’t seen yet. This is really the thing that is making me love this game. I like the combat, the atmosphere is really interesting, and I’m really curious to find out more about the bug creatures that inhabit this world, but I love that I get to do experience all of that while wandering through these cavernous areas just to see what I can find.

Hollow Knight is a great game. It’s cheap, it’s fun, and it’s available on just about any platform. The original game came out last year, and it has just released this year for the Nintendo Switch, for only $15. It can be a bit difficult, it can be a bit of a pain, but if you pay attention, and put in just a little bit of time to get familiar with the mechanics, this game is absolutely incredible!

And hey, if you want to buy this game, go do it through this link, and maybe magical Amazon fairies will throw a few pennies at me!