I’ve played through Final Fantasy VII exactly once. It was about 15 years ago, and I absolutely loved it. A few years after that, I started itching to play it again, but never got around to it. Then there started to be rumors of a remake, so I decided to wait. Then I started listening to No One Can Know About This, and decided I’d start replaying it when they got to the game. Then I heard a Switch version was coming, so I decided that was how I was finally going to play it.

So last week, I finally dove back in and started another play through of Final Fantasy VII.

First impression are.. not so great? The battle mechanics and everything are fine, but the game just looks awful. So much so that it becomes difficult to play. There have been several times already (I’m still in Midgar) where I’ve had to look up a guide just to figure out, like, where I was supposed to move my dang character. There are plenty of classic games I like playing, but the murky, muddy, dark environments in this are just hard to work through.

On the plus side, the timing worked out that I’m also able to play through this time as a run at the Materia Lockdown charity challenge, organized by my friend Bill (from The RPG Golden Years podcast). Basically, he and his team have gone through and created a series of job classes based on different combinations of Materia, so you end up with, like, Cloud only being able to use purple and green, or Aerith using red and yellow.

I’m still pretty early on in the game, so I haven’t really fully felt the impacts of the limitations this challenge sets out, but I’ve definitely found myself being more thoughtful about assigning Materia than I would be if I could just throw it anywhere. I’ll probably post mini updates about my progress on the blog as I keep playing through the game, but so far I’d definitely recommend everyone check it out. It’s an interesting twist on a classic game, and it’s in support of a fantastic charity.

Plus, I made the logo, which I’m really pretty proud of. 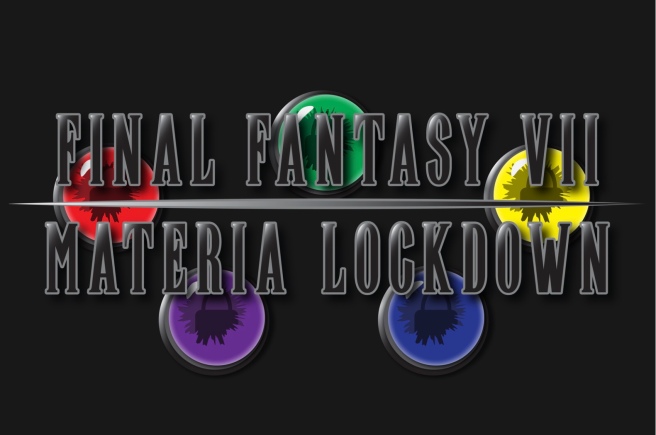 One thought on “Returning to Midgar: FF7 and the Materia Lockdown Challenge”